Home Travel + Leisure Top 10 Tourist Spots in the Philippines to Visit on your Next... 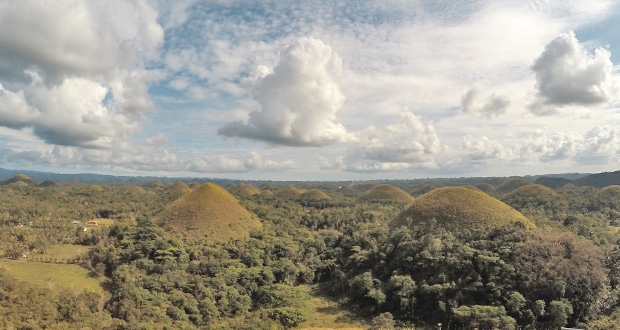 With all the tourist spots in the Philippines, the country is no stranger to thrilled visitors who are excited to discover all of its hidden beauty. The archipelago is divided into three major island groups – Luzon, Visayas, and Mindanao-all equally blessed with marvelous tourist spots. Wherever province or town you go, there will surely be a beautiful sight waiting for you.

To help you plan your next vacation, we’ve rounded up 10 tourist spots in the Philippines that we think you shouldn’t miss.

Hidden within a simple town in the underrated province of Abra is one of the most enchanting tourist spots in the Philippines, the Kaparkan or Mulawin Falls. The steps found in the 500-meter long terraced waterfalls are made of limestone and can double as a staircase to climb or as crystal clear pools to bathe in. The best time to visit Kaparkan Falls is from July to September, the rainy season in the Philippines. Otherwise, it’s all dry and lifeless.

Sitting on top of the Cordillera Mountains for 2,000 years is a National Cultural Treasure of the Philippines, the Banaue Rice Terraces. The Ifugaos constructed these rice fields according to the contours of the mountains to be able to grow rice on steep land. It’s a picturesque sight that expresses the harmony between humankind and nature.

Batanes is home to some of the tourist spots in the Philippines that look like they’re straight out of a movie, and Racuh a Payaman is one of them. Its clear blue skies, lush green fields, awe-inspiring mountains, and sparkling sea are the perfect ingredients to a delightful view and a relaxing vacation.

Puerto Princesa, Palawan boasts a magnificent limestone karst that was hailed as a UNESCO World Heritage and one of the “New 7 Wonders of Nature.” The Puerto Princesa Underground River is hidden right underneath the St. Paul Mountain Range, and is one of the world’s longest navigable underground rivers. Although the river is 8.2km long and the cave stretches up to 24km, only the first 4km is open for tours. Aside from the jaw-dropping limestone formations, the underground river is also home to a complex ecosystem and rich biodiversity that includes giant spiders, crabs, fish, snakes, bats, and swallows that are only found here.

Islas de Gigantes is a cluster of 2 big islands and 10 islets found in Carles, Iloilo. What makes this seascape one of the must-see tourist spots in the Philippines are its pristine beaches, clears waters, amazing rock formations, rich marine life, and fresh seafood.

On one of Carmen Town’s hill is a viewing deck that offers a 360-degree view of more than a thousand Chocolate Hills. These cone-shaped limestone hills earned their name “Chocolate Hills” because of how they resemble chocolate kisses during the driest season (February to July). Geologists are still baffled by this peculiar geological phenomenon, but most of them think that they were formed from uplifted coral deposits.

The Calbiga Caves of Samar is one of the best tourist spots in the Philippines for the adventurous and thrill-seekers. Covering 2,968 hectares, the Calbiga Caves have been hailed as the largest cave system in the Philippine, and the second largest in Southeast Asia. This cave system is composed of 12 known caves, and the most prominent is the stretch of Langun and Gobingob caves. Towering columns, amazing rock formations, stunning speleothems, huge stalagmites, and captivating critters embellished the caves.

Santa Cruz Grande is a little island where a small community of Badjaos lives. The island is open to the public, but arrangement must be made first with Zamboanga’s City Tourism Office before heading there. What makes this island one of the must-see tourist spots in the Philippines is its pink sand beach. The rosy hue of the island results from crushed red organ pipe corals (tubipora musica) that blend with the sand, giving it its unique color that can be best seen under broad daylight. Santa Cruz Grande is also home to rich marine life, making it a great spot for scuba diving and snorkeling. There aren’t hotels or lodges on the island, and camping isn’t allowed, but there are cottages on the island that can be rented by visitors.

Hidden in Surigao del Sur is an enchanting saltwater river that flows in Barangay Talisay, and converges with the Pacific Ocean in the end. Visitors are attracted by Hinatuan River’s mystical blue waters that are clear enough to see the fish swimming in the river.

The list can go on and on if we talk about every single tourist spot in the Philippines, and ranking all of them according to their beauty is impossible. They’re all equally stunning, that’s why spending your vacation in the Philippines will surely be exhilarating.