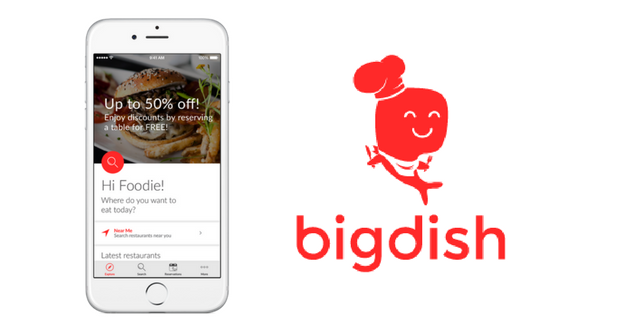 We’re pretty sure than almost half of the population today’s got a smartphone, and that they use it on a daily basis. We’ve got numerous apps that has a lot of functions that makes life easier, but what more if it makes you save more?  Food delivery apps may sound convenient and restaurant reviewing apps may be helpful tools, but BigDish got a heap of perks for its users.

Launched only last October 2016, you could now view around 200 restaurants on the BigDish app and reserve a table on your selected time, plus discounts. It isn’t just a reservation or booking app because it’s got deals which will make you dine out more often. As you open the app, you could select your preferred restaurant based on what’s new, what’s recommended, what’s near you, or depending on your chosen category. Once you’ve got a resto in mind, confirm your reservation with the number of people with you and your selected time with its corresponding discount. Then, that’s it! There’s no need to provide credit card details, print vouchers, or even deposit or transfer money because all it takes is a a few taps on your phone. This may solve not only your dilemma when you get all confused when dining out because there are lots of good restos around Manila, but will also make you save some bucks after a good meal.

Even when it’s just a startup app, it sure answers the problem of both the customers but also the restaurant owners. Joost Boer, the BigDish app CEO, aims to help increase a resto’s profitability by making people book for tables on off-peak time slots through discounts. This principle is called yield management, where adjustments are to be made depending on certain market factors such as demand or competition. Not only the restopreneurs in Manila will get this advantage because it is also available now in Indonesia and Hong Kong. Being the fastest growing restaurant reservations platform in Asia, the BigDish team spearheaded by Joost Boer, proves that it is an effective app only because it’s what the people needs. With a Bachelor’s Degree in International Business and Management and Strategic Management in Erasmus University of Rotterdam, from the Netherlands, Joost first moved to Australia, then Indonesia, then Vietnam, and finally in the Philippines where he’s been staying for the last 4 years. With the right people in his team, Joost managed to get his startup entering the Asian market in less than 6 months. As someone’s who’s had experiences in the field of restaurant management, he knows how difficult it is to work in that industry. With his highly talented and diverse team, they were able to reach out to help both restaurant owners and food lovers around the 3 countries.

Even with the rapid rise of the number of technologies being invented today, it’s still the usage and the function which matters most to the users. BigDish ticks those checks off of the list. Also, who wouldn’t want to dine in a fine restaurant for a cheaper bill, right?

BigDish app is available for both iOS and Android for free, so why not give this app a try?