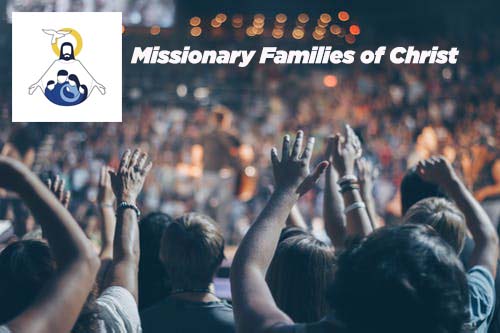 via CBCP News | A lay Catholic movement has changed its name.

Over the weekend, the Couples for Christ Foundation for Family and Life, or CFC FFL, announced it will now be called Missionary Families of Christ.

According to a statement, the change of name is because “Couples for Christ is no longer reflective of our call”.

“Now it is clear who we are and what we are called to do,” Bro. Frank Padilla, MFC Servant General, said.

He stressed that the two most important aspects of Christian life are the renewal of families and the work of evangelization.

“This is what our call is about,” he said. “This is our identity, our charism and our work. We are Missionary Families of Christ.”

CFC started in 1981 with 16 couples as a way to strengthen marriages and bring couples into a deeper relationship with God.

The couples expanded to bringing in their families in the 1990s with the coming of the Family Ministries: Kids, Youth, Singles, Handmaids, and Servants.

And by the 2000s, CFC became a worldwide community reaching more than one million members.

In 2007, however, the CFC community split into CFC Global Mission Foundation and CFC FFL.

Although the Missionary Families of Christ was locally launched at the Ynares Center in Pasig on Oct. 6, its official worldwide launch will be on Oct. 7.