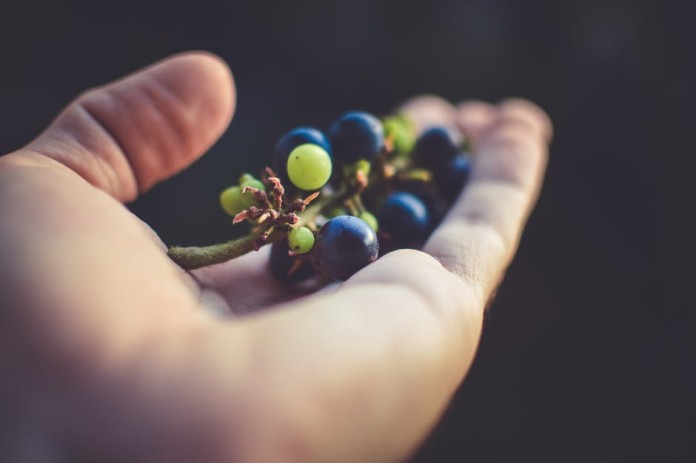 Grapes are one of the seven staple foods mentioned in Deuteronomy 8.8 ‘A land of wheat and barley, of vines and fig trees and pomegranates, a land of olive oil and honey”. Grape was one of the seven fruits that Moses messengers discovered in the land of Israel. (Numbers 13: 20-23). Moses as he led the exodus of Jews from Egypt sent messengers throughout the promised land in search for fruit and food. The grapevine was one of the fruit brought back by the messengers.

The vine is regarded as the symbol of the children of Abraham. The Christians who followed the ancient Jewish faith too regard the grape vine with reverence. There is a beautiful verse John 15 that compares the grapevine to Jesus:

“I am the true grapevine, and my Father is the gardener. He cuts off every branch of mine that doesn’t produce fruit, and he prunes the branches that do bear fruit so they will produce even more. ..”

In a region whose culture and way of life is so interwoven with each other, grapes find mention in the Holy Quran too. It is regarded as a fruit of the people of paradise. 19: Al Mu’minum states “Then we brought forth for you therewith gardens of date-palms and grapes, wherein is much fruit for you and whereof you eat.”

There is evidence of grape vine cultivation in Ancient Egypt. A list of vineyards was discovered from the first step pyramid at Saqqara. The step pyramid was built during the reign of King Djoser c 2650 BC to 2570 BC. The list includes the famous vineyard “Horus on the Height of Heaven” that produced wine from those times up to the Greek period. Temples had vineyards of their own. Rameses III lists 513 vineyards belonging to the temple of Amon-Ra.

The Greek God, Dionysus is the god of fertility and wine. He is credited with creating wine and viticulture. Bacchus is the comparative Roman God of wine. Bacchus was probably a copy of the  Greek God Dionysus. The grapevine across this entire region is tied to fertility, prosperity social and cultural ritual. Greek song and literature like the works of Homer have extensive references to wine made from grapes.

The earliest evidence of grape growing go as far back as 6500 BC. Chemical analysis of wine jars from the Neolithic period in Georgia reveals wine making taking place in that period. The cultivation of grapes was said to be taking place in the Black Sea region and Persia from the seventh and fourth millennia BC. (Chataignier 1995). From here it spread with trade, conquest and cultural exchange to other parts of the world. It was the Greeks who brought viticulture to Marseilles in France. (Robert J Weaver, 1960)

Wild grapevines can be seen growing along river banks in deciduous and semi-deciduous forests in pockets across a wide area in the Trans Caucasian region, Western Europe and the Mediterranean basin. (Arnold et.al, 1998) Most cultivated varieties of grapes come from the just one species Vitis vinifera which belongs to the Vitaceae family.

The American bunch type of vines comes from V. labrusca and its derivatives or from Muscadine type (V.rotuntifolia). There are other species Vitis rupestris, Vitis berlandieri and Vitis amurensis that produce grapes of poor quality. Plants of these species are primarily used as rootstock on which cultivated grape varieties are grafted. Wine grapes are generally smaller than table grapes. These contain many seeds.

There are sixty inter-fertile wild Vitis species found distributed across the subtropical and temperate parts of Asia, North America and Europe.(Rossetto et.al 2002). The Food and Agriculture Organization has estimated that seventy percent of the grapes cultivation is for wine making. Of the 10000 types of grapes, 1300 are used in wine making. The total world production of grapes in 2012 has been put at 69 million tons (International Organization of Vine and Wine).

Grape cultivation is best undertaken in sandy or gravelly soils that generally have good drainage. It is not soil fertility but drainage that is critical to grapevine cultivation. Alkaline soils are best avoided. Average yields per hectare ranges from 5 to 20 tons per hectare. Yield varies with variety, crop density, pruning intensity etc.

Apart from use of grape in the form of fruit and wine, ancient folk healers made an ointment from the sap of grapevines to treat skin and eye diseases. Grapes leaves were also used to arrest bleeding and provide relief in cases of inflammation and pain.

Grape seed when given to a group of healthy volunteers were found to substantially raise the  level of antioxidants in the blood. Antioxidants are said to retard pace of cell death, the primary cause for aging. (University of Maryland Medical Center)

Flavonoids found in red wine is said to help lower LDL (bad cholesterol). The American Heart Association does not recommend though consumption of wine to reduce the risk of heart diseases.

Other studies indicate grape seed can help reduce edema, high blood pressure, mitigate chronic venous insufficiency in the legs causing pain, swelling and fatigue etc. (University of Maryland Medical Center). More research is though required to finally validate these and other medicinal uses of grape seed. However, the religious and cultural significance of the grape vine endures across the globe.

Sudhir Ahluwalia is a business consultant. He has been management consulting head of Asia’s largest IT outsourcing company Tata Consultancy Services, business advisor to multiple companies, columnist and author of upcoming book on herbs-Holy Herbs. He has been a member of the Indian Forest Service. His webpage is: www.sudhirahluwalia.com