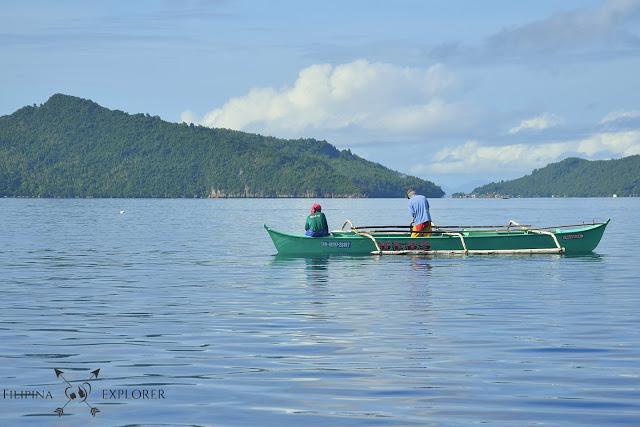 Famished and wet, we trudged our way out of thick rows of passengers disembarking at San Jose port.

All coming from Surigao del Norte, we braved ferocious waves, but above all, the thought of being stranded at sea, due to monsoon-led rains.

In a silly effort to save pesos, we began tackling the steep incline leading to the Dinagat Tourism Office, an 11-kilo backpack and a four-kilo drybag swinging sideways with every step, alongside a hungry six-year-old. After a minute, we came across a habal-habal driver and asked for directions. “Ayaw niyo po ba sumakay na lang? Sampung piso lang naman po papunta doon. Para di po kayo mahirapan ng anak niyo (You don’t want a lift? To make it easier for you and your daughter. It only costs P10 to get there.),” he said.

Thin and meek, the 30-something driver, Kuya Giovanni, has been nothing but friendly from the get-go. There are drivers that smell of greed outright, but this one was more than caring toward Lia and smelled of compassion, kindness, humility, and other virtues that are now just hanging by a thread in our Filipino psyche.

I obliged and was glad I did, seeing the 45-degree slope that awaited us. There was no way we’d get to the tourism office by foot in five minutes as what Google Maps predicted.

Majority of the population in the Province of Dinagat Islands, or simply Dinagat – one of the Philippines’ youngest and smallest provinces – are fisherfolk and habal-habal drivers like Kuya Giovanni. There are no big businesses here, save for a few local banks. No Mercury Drugstore or Watson’s. No branded malls and supermarkets like SM  Hypermart, Robinson’s, Waltermart, and Puregold. Everything that is consumed in the islands is hauled from Surigao del Norte southwest of the province, a good one to one and a half hours by ferry.

We boarded the Seahorse Express – the only ferry that serves the route – at 8:30 am. It left the port in Surigao Boulevard at 11:30 am, after loading in countless sacks of rice, TV sets, electric fans, and other commodities bought by Dinagat locals.

We ended up in a seaside lodge that overlooks ports on either side and a man-shaped island named Lalaking Bukid – which locals call “Gat” (the other, Babaeng Bukid, is “Dina”. Together, they make up “Dinagat”). After plopping our bags into the floor, I agreed to do a half-day tour with Kuya Giovanni.

On trips, especially personal ones like this one, it’s become a habit  of mine to talk to townsfolk whose service we require, including boatmen, drivers, and homestay owners. I find their backstories eye-opening and, however limited, they scrape the superficial iceberg off aesthetically pleasing destinations.

The motorcycle stopped in front of a massive castle on a hill with rose-colored spires and sturdy brick pillars. Islander’s Castle, as it’s called, is a local pride, and on land tours, every habal habal driver encourages a look-see. It’s also one of the most well-known properties of the Ecleos, a political clan that has been ruling the province for decades.

The Ecleos are a ubiquitous presence here. Almost all schools and chapels are named after and owned by them. Tarpaulins that read “happy birthday” next to a photo of an Ecleo elder hung on trees and walls. Theirs is the perfect epitome of ao political dynasty that has turned into a superpower by successfully merging two of the most powerful concepts in the world: politics and religion.

The Philippine Benevolent Missionaries Association, Inc. or PBMA is a non-sectarian religious organization that is unique to Dinagat. It was founded by Ruben Ecleo Sr. in 1965 and is touted as a foundation that offers free faith-based healing services.

Locals treat PBMA and its founder, the “Divine Master”, with utmost respect – even believe that he was Christ incarnate. Statistics estimate PBMA followers to be at 50 or so percent of the population. That includes Kuya Giovanni, who is a PBMA missioner – a title given to one who is allowed to conduct healing rituals.

He proudly showed me his ring – a chunky silver loop with a faux diamond at the center – signifying his rank. Others, he said, can even summon the dead back to life. “Released – ‘yan po ang tawag namin sa mga nabuhay na patay (Released – that’s what we call people who are reincarnated).”

Healers are prohibited from asking for remuneration for services, he explained. On the other hand, the Ecleos require their members monthly contributions – similar to tithing – and training fees for healing and reincarnation rituals.

We spent more than five hours touring two of seven municipalities, and not once did he tire of sharing praises and prophecies. Apart from the name “Ruben” appearing several times in the bible, he also tells me that the arrest of their founder’s successor – Ruben Ecleo Jr. – for the murder of his wife and money laundering has been prophesied in the Holy Word. These, along with the fact that despite clashes with law enforcement, members only seem to increase in Southeast Asia and North America, are sufficient reasons for believers to hang on.

Outside of the province, many perceive PBMA as a cult or a scam.

Brimming with glaring beaches, caves, falls, limestones, and mineral-rich mountains all over its 1,036-square kilometer terrain, the province is among the most abundant in natural resources in Mindanao. For three days, I’ve seen expanses of corals just meters away from various shores, and public beaches that can rival expensive, privately owned ones elsewhere. Cruising past San Jose to Cagdianao, one enjoys a stunning vista of copper-colored mountains, whose hue is a result of rainwater mixing with their oil-heavy composition. In the northernmost municipality of Loreto, a thousand hectares of bonsai forest sprawls across Mt. Redondo.

Despite its enviable biodiversity, Dinagat remains as one of the poorest provinces in the country.

Loreto is heavily engaged in mining – allegedly with the go signal from the Ecleos. Mt. Redondo’s bonsai forest is owned by a combination of Chinese, Japanese, and Western mining companies. Soon, environmentalists fear, this unique feature will be nothing but a memory.

As we made our final stop in Tagbirayan Beach, I asked Kuya Giovanni how he finds working here during lean season. He tells me most of them earn P100 to P300 a day. Our half-day tour, which covers about 45 kilometers of the island back and forth, costs P800, but that doesn’t happen every week. He has a wife and two kids, all of whom he uprooted from their hometown in General Santos City where income was more promising, so that they can all dedicate their lives to PBMA’s cause.

One hundred a day for a family of four. Meanwhile, the Ecleos have schools, millions in their bank accounts, and a gated hillside castle patrolled by a guard 24/7.

Apart from unbreakable, foreign countries also call the Filipino faith fatal. They lament that our excessive reliance on faith amid casualty prevents us from seeking larger truths that will allow us to implement sound, real-world solutions to our problems.

“Do you have regrets?” I asked. He shook his head, a contented smile spreading across his face. “Lahat naman po tayo may problema, ma’am. Nasa tao na rin po. Mahirap, pero ang importante, masipag tayo, kumakayod, at may pananampalataya (We all have problems. It depends on the person. It’s hard, but what’s important is that we keep pushing on and holding on to our faith).”